Getting Started with AWS: Global Infrastructure 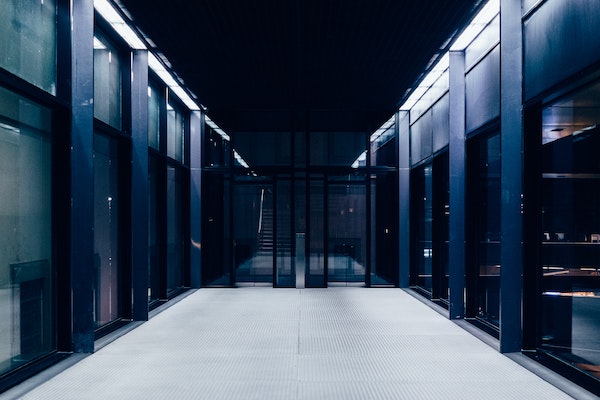 Author's note: I recommend anyone who works on AWS or wants to build AWS fluency have foundational knowledge of IPv4 Networking and the OSI model. This will make it easier to understand these Getting Started Guides for AWS and other cloud vendor content. And for a refresher, read the previous blog in this series: Getting Started with AWS: Design & Building Blocks

It's important to understand AWS's Global Infrastructure because that is where all foundational AWS services like network, compute, storage and databases reside.

Let’s start with the atomic unit AWS' infrawstucture, the individual Data Center (DC) — not to be confused with DC Comics! A DC is comprised of anywhere from 40,000 to 80,000 servers and no services run in this layer. This is the same for any other large cloud provider, so AWS is no different in this case. There are things AWS does in their data centers that makes them unique: The way they secure them and make them redundant in terms of redundant network, internet, power access and HVAC.

But none of that matters. Why? Because it's the cloud and AWS is already taking care of this.

What matters is understanding the terms of your Service Level Agreement (SLA). This is the fine print which AWS tells you what kind of uptime and availability to expect for their services and what hardware and technology they use to achieve that.

Get 14 hours of self-paced training, 91 hands-on labs and 1 hour of one-on-one coaching with an AWS expert for only $118.

The next infrastructure layer is the AWS Region. A Region is a collection of multiple, physically separated AZs. There are usually three or more AZs in a Region. That number three is very important for redundancy. I don't know for sure how far the geographic separation is, but in some re:Invent videos, speakers have said it is in the tens of miles. What’s important to know is that a weather or a power event is unlikely to affect more than one AZ in the same region at the same time. That’s why they are geographically separate. All traffic between AZs is encrypted and it goes through AWS private fiber to do so. 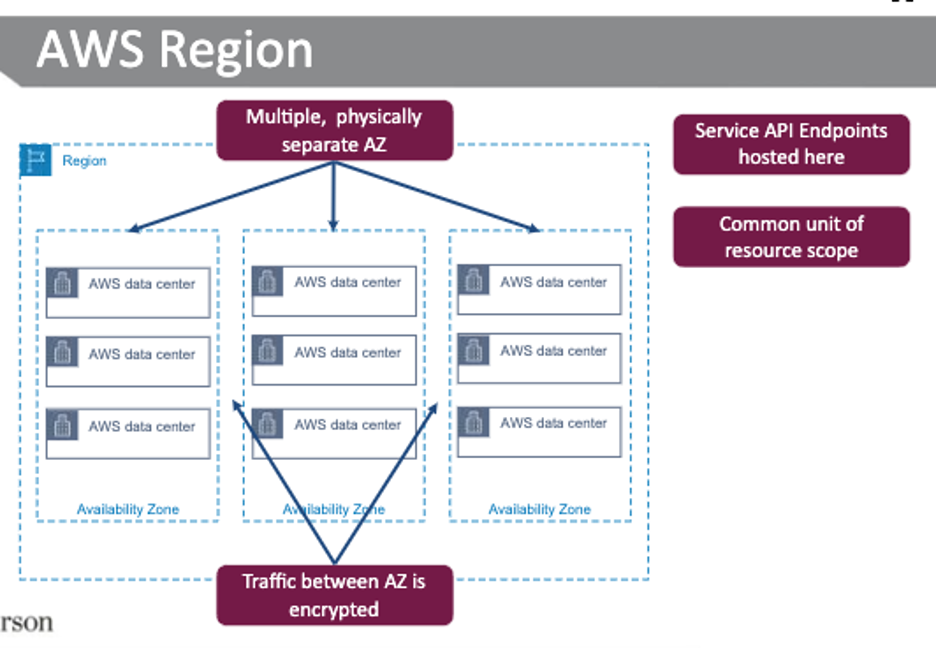 The region is a very important scope for AWS. All AWS services and API endpoints are all scoped at the region level. Most services that we create in AWS will bedeployed at a Region scope level, which means they are very likely replicated in the AZs within the Region. That's not transparent to you as the customer, but you don't have to worry about it because AWS takes care of it.

To summarize: The DC is the foundational unit of AWS infrastructure. The next level up is AZs comprised of DCs, then Regions which are a collection AZs, usually three.

AWS Local Zones are becoming more popular with AWS. Imagine a city that is growing in importance where many business headquarters operate. Those businesses are leveraging AWS Cloud. AWS recognizes that they don't have a region in that particular city, but there is likely a Region a couple hundred miles away. To support, AWS will create just enough infrastructure for there to be an AZ in that city, then associate it with the closest Region. This is called a Local Zone. In the US, there are Local Zones all over the place, even though there only a handful of Regions. 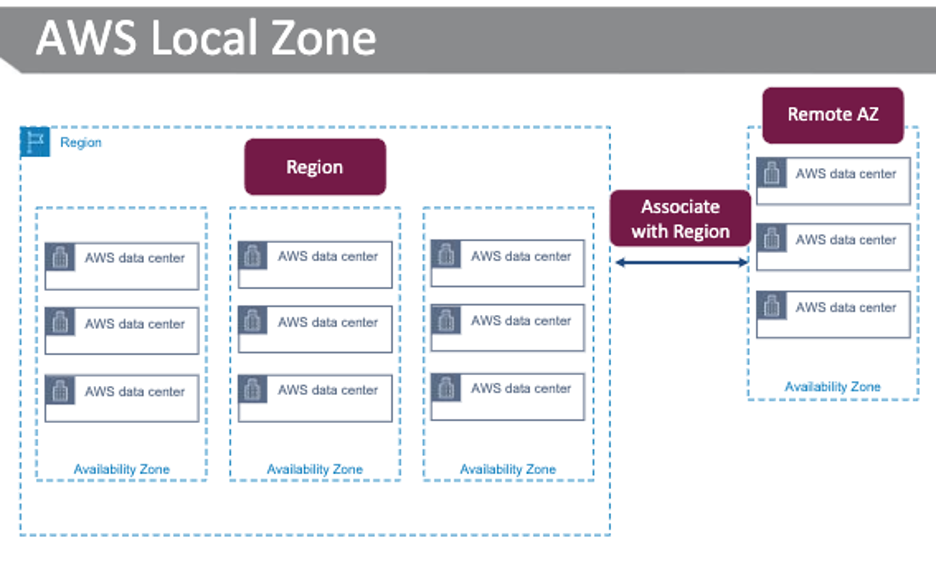 Edge Locations lie outside of the Region infrastructure and is not part of the DC, AZ and Region nomenclature. Edge Locations are created when AWS buys or rents rack space or cage space from other data center providers to expand their cloud footprint. The Edge Locations are distributed around the world and achieve better distribution than the actual Regions. They are used for services that are scoped at a global level, where your data is replicated in as many places around the world as possible. So this is good for services like DNS, content delivery and content caching. 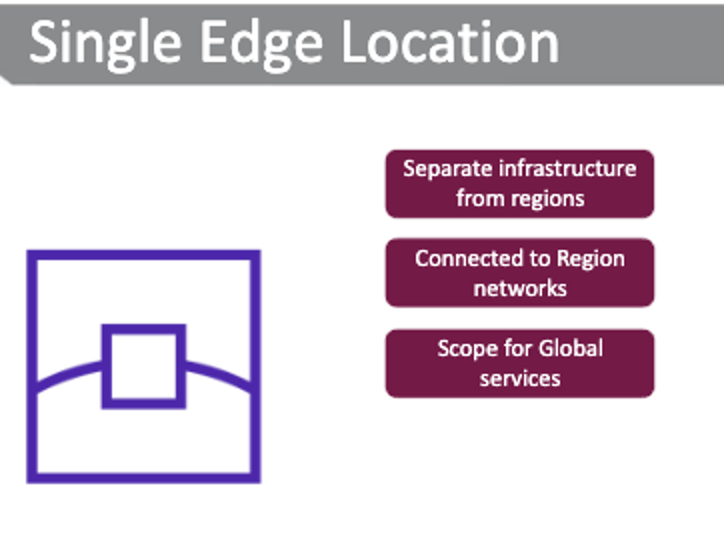 Looking at a global map, you can see there are all kinds of dots all over the place. AWS usually maintains about a 10 to 1 ratio of Edge Locations over Regions. At the start of 2022, there are around 26 Regions and over 275 Edge Locations. 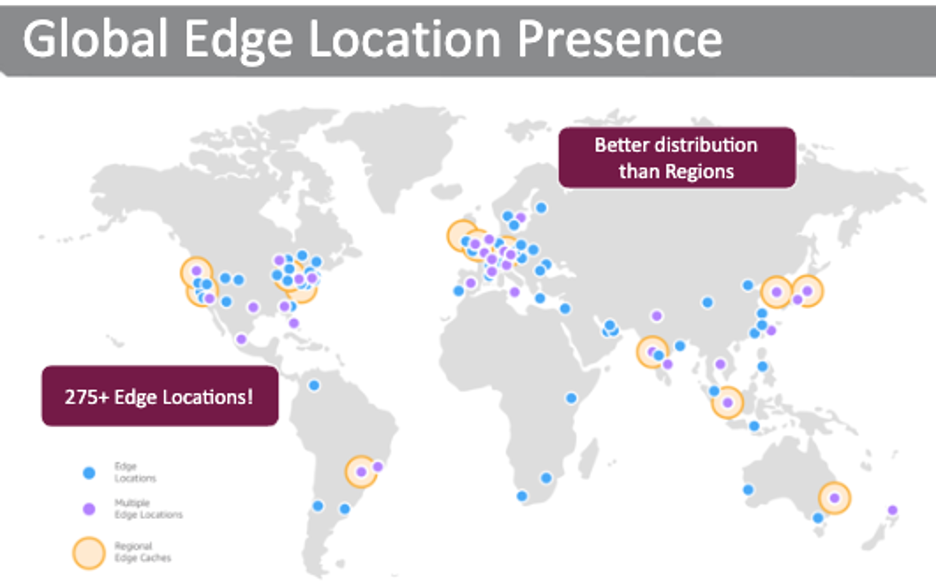 And here is a map of AWS Regions from December 2021. If you check AWS documentation regularly, you'll notice AWS always has a number of Regions in development. So based on the orange dots, you can see the infrastructure is expanding at a pretty rapid rate. 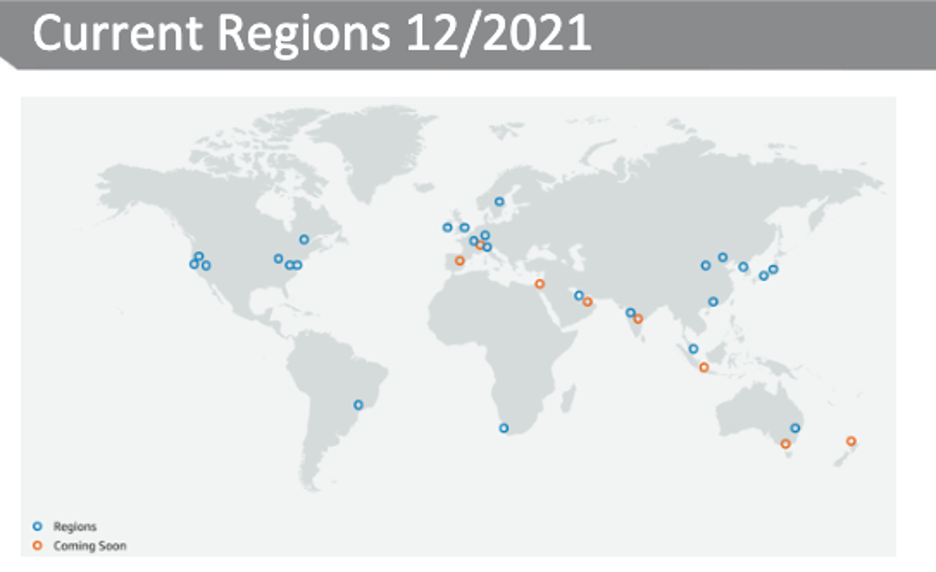 All images sourced from AWS.